One of the biggest things I hear from my clients is “I don’t have time for breakfast” or “I can’t eat first thing in the morning”. I totally get both of these statements because I also used to be this person. Skipping breakfast does nothing but set the body up with blood sugar imbalances for the rest of the day. This will lead to cravings, moodiness, and belly weight that you can not lose, regardless of how clean you eat. I am all about things that make my life simple and convenient, putting in a little effort in the beginning to minimize the effort later.

Well this post is strictly about breakfast – we will come back to dinners another time.

Smoothie freezer packs are awesome because in the morning, all you need to do is to throw the freezer pack in the blender with your choice of liquid, and blend. Easier than cereal (and speaking of which, throw in a scoop of protein powder and it is a great side to the children’s cereal).

I made a total of 57 smoothies spending $74.17, which comes out to $1.30 each smoothie. Much cheaper and healthier than buying one elsewhere. Here’s how I did it!

*Recipe adapted from Oh She Glows

*Recipe from Hell if I Gnaw

Note: When preparing these as frozen packs, you will include everything in a bag except the milk and/or ice. The milk and ice need to be added at the time you blend it to help out with the consistency. 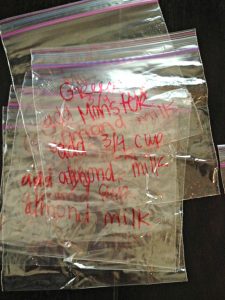 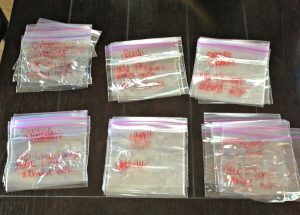 Once you’ve decided which smoothies to make, label the bag. Be sure to include how much milk and/ice to include when you’re ready to blend it. 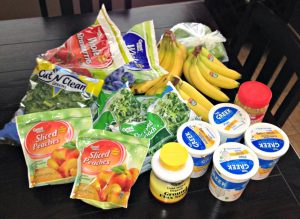 Decide on how many smoothies you want to make and which recipes you are going to use. Create a grocery list of items you’ll need. The nice thing about these smoothies is that they’re all pretty similar and you don’t need a huge variety of items. 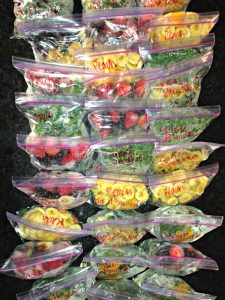 Gather all of the ingredients for each recipe and stuff each bag with the desired items. I used frozen spinach and fruit which made the process much faster. Have the kids help!!! The more involved they are in food prep, the more likely they are to eat it (or drink it) and follow a healthy lifestyle on their own.  Plus as an added bonus…by having a kitchen helper or two, it takes some of the work off you.

Ta da! That’s it! Just remember to add the milk and ice later and you’re all ready to go! The best part about these recipes is that each one is under 200 calories and super healthy! It’s a sneaky way to get your kids and husband to eat healthy too!